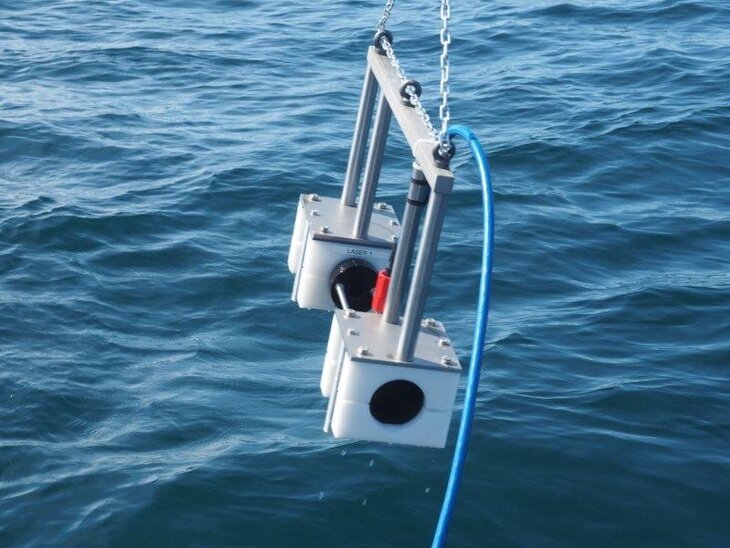 Scientists at the University of Aberdeen have developed one of the most advanced subsea holographic cameras in the world, capable of rapid 3D imaging of marine organisms and microparticles.

The weeHoloCam is the most compact device of its type, as well as the fastest in terms of image processing time.

It was developed as part of a project funded by the Defense & Security Accelerator (DASA), a part of the MoD, and can be used for a variety of subsea applications—for example studying marine habitats and organisms in precise detail, or monitoring ocean microplastic pollution.

The technology was first tested last week, where it was deployed in the North Sea just outside Aberdeen. Around 100,000 holograms were recorded during the sea trial.

The project has been led by Dr. Thangavel Thevar from the University’s School of Engineering, along with Emeritus Professor John Watson, Dr. Nick Burns, Dr. Amer Syed, and external consultant Mike Ockwell.

Dr. Thevar said that in addition to its size, the speed at which the camera is capable of extracting images is its major advantage.

He explained: “Until now, speed has been a major limiting factor in terms of wider practical applications of digital holography. But with weeHoloCam, the recorded holograms are processed in near real-time, allowing scientists to visually examine images as they come in.

“Each hologram can be considered as a stack of thousands of 2D images, but we have developed an algorithm to rapidly reconstruct these 2D images, identify particles, and extract them to create 3D versions.

“The processing time is much faster than existing systems, which coupled with its small size makes the weeHoloCam one of the most state-of-the-art devices of its type in the world.”

The camera’s unique features will enable it to perform a variety of tasks, however the research team’s current focus is in subsea applications, and they are working with Marine Scotland Science to look at the possibilities for its use in monitoring sea plankton.

A proposal for monitoring microplastic pollution in the ocean, involving other UK Universities, is also being prepared.

Dr. Thevar added: “We have presented the technology in networking events and it has already generated a lot of interest among the marine science community.

“I am very grateful to DASA for trusting us to successfully deliver this challenging project, which has surpassed all expectations. We are genuinely excited at the prospects for multi-disciplinary research that weeHoloCam will offer.”

Chris Jenkinson, DASA Project Manager was delighted with the project’s progress: “This is just the sort of innovation that DASA funding is designed to accelerate. This has the potential to create a useful defense capability within a short number of years—truly rapid impact!”

Tim Clarke, DASA technical partner, from the Defense Science and Technology Laboratory (Dstl), said, “The technical and scientific advances that the team from Aberdeen have achieved through this DASA project make the concept of near real-time holographic measurement of marine organisms and microparticles, from a small uncrewed vehicle, a real possibility.”

Provided by
University of Aberdeen

DeepMind AI Says Will Release Structure of Every Protein Known