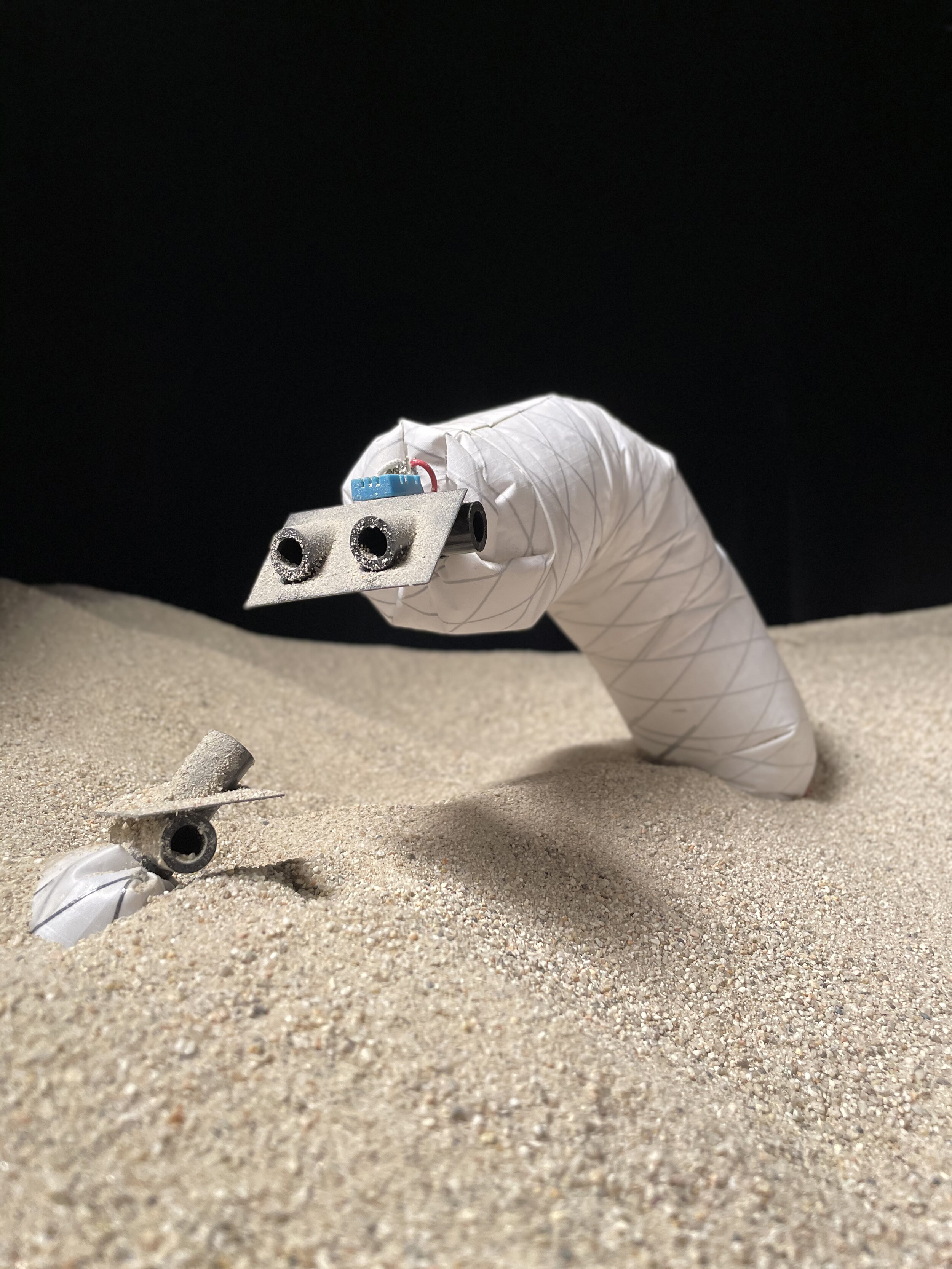 We’ve seen robots take to the air, dive beneath the waves and perform all sorts of maneuvers on land. Now, researchers at UC Santa Barbara and Georgia Institute of Technology are exploring a new frontier: The ground beneath our feet. Taking their cues from plants and animals that have evolved to navigate subterranean spaces, they’ve developed a fast, controllable soft robot that can burrow through sand. The technology not only enables new applications for fast, precise and minimally invasive movement underground, but also lays mechanical foundations for new types of robots.

“The biggest challenges with moving through the ground are simply the forces involved,” said Nicholas Naclerio, a graduate student researcher in the lab of UC Santa Barbara mechanical engineering professor Elliot Hawkes and lead author of a paper on the cover of the journal Science Robotics. Whereas air and water offer little resistance to objects moving through them, he explained, the subterranean world is another story.

“If you’re trying to move through the ground, you have to push the soil, sand or other medium out of the way,” Naclerio said.

Fortunately, the natural world provides numerous examples of underground navigation in the form of plants and fungi that build underground networks and animals that have mastered the ability to tunnel directly through granular media. Gaining a mechanical understanding of how plants and animals have mastered subterranean navigation opens up many possibilities for science and technology, according to Daniel Goldman, Dunn Family Professor of Physics at Georgia Tech.

“Discovery of principles by which diverse organisms successfully swim and dig within granular media can lead to development of new kinds of mechanisms and robots that can take advantage of such principles,” he said. “And reciprocally, development of a robot with such capabilities can inspire new animal studies as well as point to new phenomena in the physics of granular substrates.”

The researchers had a good head start with a vine-like soft robot designed in the Hawkes Lab that mimics plants and the way they navigate by growing from their tips, while the rest of the body remains stationary. In the subterranean setting, tip extension, according to the researchers, keeps resisting forces low and localized only to the growing end; if the whole body moved as it grew, friction over the entire surface would increase as more of the robot entered the sand until the robot could no longer move.

Burrowing animals, meanwhile, serve as inspiration for an additional strategy called granular fluidization, which suspends the particles in a fluid-like state and allows the animal to overcome the high level of resistance presented by sand or loose soil. The southern sand octopus, for instance, expels a jet of water into the ground, and uses its arms to pull itself into the temporarily loosened sand. That ability made its way onto the researchers’ robot in the form of a tip-based flow device that shoots air into the region just ahead of the growing end, enabling it to move into that area.

“The biggest challenge we found and what took the longest to solve was when we switched to horizontal burrowing, our robots would always surface,” Naclerio said. Whereas gases or liquids evenly flow over and under a traveling symmetric object, he explained, in fluidized sand, the distribution of forces is not as balanced, and creates a significant lift force for the horizontally traveling robot. “It’s much easier to push the sand up and out of the way than it is to compact it down.”

To understand the robot’s behavior and the largely unexplored physics of air-aided intrusions, the team took drag and lift measurements as a result of different angles of airflow into from the tip of a solid rod shoved horizontally into sand.

“Frictional force response in granular materials greatly differs from that of Newtonian fluids, as intruding into sand can compact and stress large swaths of terrain in the direction of motion due to high friction,” said Andras Karsai, a graduate student researcher in Goldman’s lab. “To mitigate this, a low-density fluid that lifts and pushes grains away from an intruder will often reduce the net frictional stress it has to overcome.”

Unlike with gas or liquid, where a downward fluid jet would create lift for the traveling object, in sand the downward air flow reduced the lift forces and excavated the sand below the robot’s growing tip. This, combined with inspiration from the sandfish lizard, whose wedge-shaped head favors downward movement, allowed the researchers to modulate the resisting forces and keep the robot moving horizontally without rising out of the sand.

A small, exploratory, soft robot such as this has a variety of applications where shallow burrowing through dry granular media is needed, such as soil sampling, underground installation of utilities and erosion control. Tip extension enables changes in direction, while also allowing the body of the robot to modulate how firmly anchored it is in the medium—control that could become useful for exploration in low gravity environments. In fact, the team is working on a project with NASA to develop burrowing for the moon or even more distant bodies, like Enceladus, a moon of Jupiter.

“We believe burrowing has the potential to open new avenues and enable new capabilities for extraterrestrial robotics,” Hawkes said.