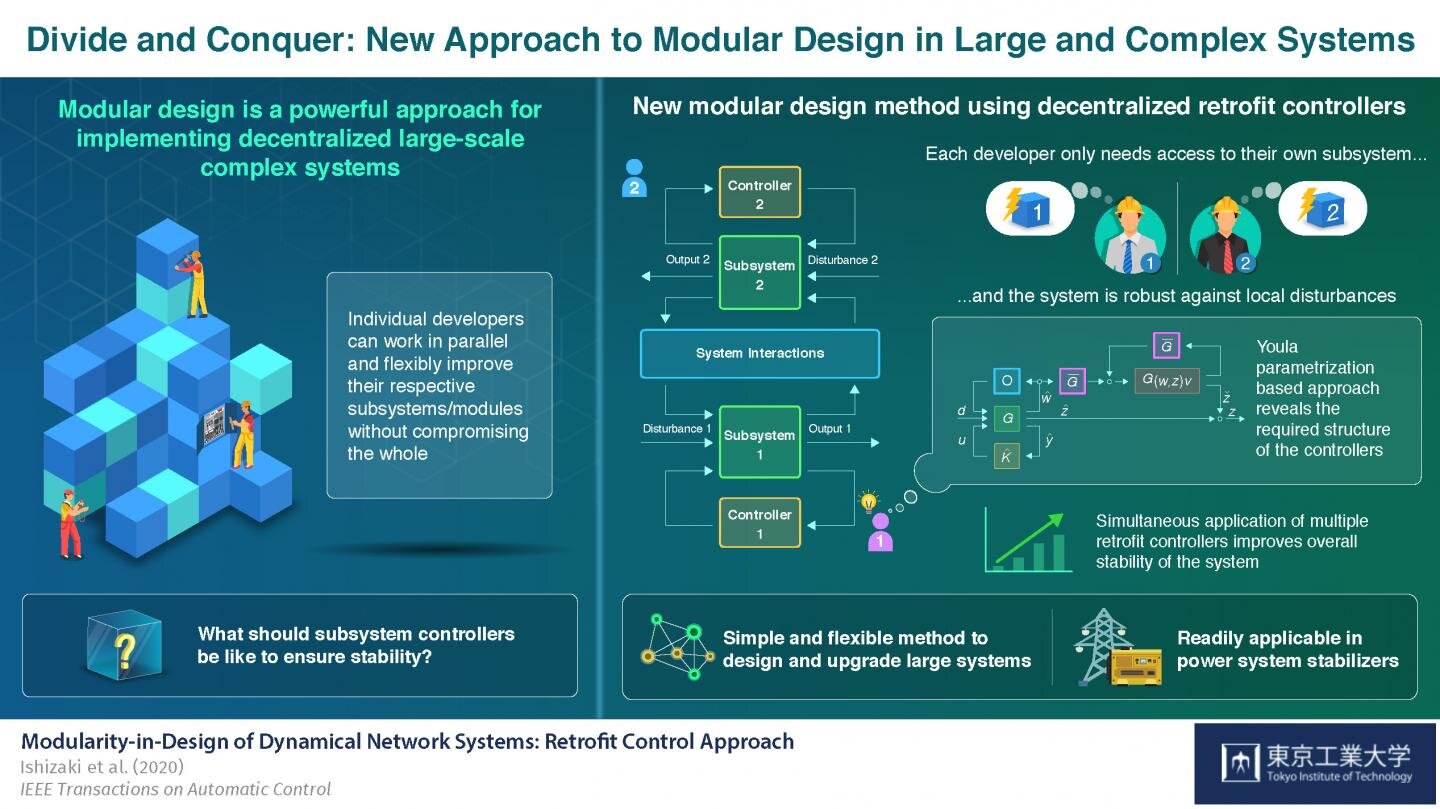 Scientists at Tokyo Institute of Technology (Tokyo Tech) develop a novel approach for the modular design of controllers for large-scale network systems. Their strategy, which provides a completely decentralized method to design controllers for subsystems of a larger whole, could be readily applied in power grids, greatly simplifying the task of sequentially upgrading individual subdivisions while ensuring stability and performance.

The control of large-scale dynamic network systems, such as national power grids, is a remarkably challenging topic. In this context, ‘control’ roughly means monitoring relevant output variables to ensure that the system operates stably and within safe margins. The difficulty and necessary considerations associated with the design and implementation of controllers usually skyrocket when dealing with complex networked systems, and theoretical studies to find new approaches to controller design are constantly being carried out.

One common problem that arises in large networked systems is that they’re integrated. So, when a developer changes or upgrades one subsystem, their ‘local’ actions can have unforeseen consequences on the rest of the network unless necessary precautions are taken for all subsystems. Even remote network disturbances caused by local temporary failures, such as the accidental grounding of a line in a power subsystem, can throw other subsystems off. Consequently, changes may not be made to one subsystem without necessitating alterations to all others.

However, as demonstrated in a recent study by scientists from Tokyo Tech, Japan, there is a design paradigm that can prevent such problems: modularity. This term implies working in “modules,” subdivisions of the main system that can be separated, changed, and recombined independently, ideally without compromising each other. Nonetheless, as explained in their article published in IEEE Transactions on Automatic Control, achieving this independence between modules through their associated controllers is not straightforward.

In their study, the scientists developed a novel approach for the modular design of subsystem controllers in linear large-scale network systems that enables a number of advantages over existing approaches. In their approach, each developer for a subsystem can independently design and implement their controllers as an add on to the existing system. To do so, they only require knowledge of their subsystem. A decentralized controller designed under such considerations is called a retrofit controller.

First, the scientists used a technique called Youla parametrization to formally describe all the relevant parameters of generic retrofit controllers in a networked system. Then, they laid out a unique design for their retrofit controller that required only standard techniques to implement. They also mathematically demonstrated that, given certain reasonable assumptions about the whole, such as a stable system prior to the implementation of the proposed retrofit controller, using their controller guaranteed both local and overall system stability, even in the face of variations in other controllers.

Moreover, through numerical experiments, they showed that simultaneously implementing multiple such uniquely designed controllers in a network translates to performance improvements across the entire system, and adding more such controllers leads to greater power enhancement. As associate Professor Takayuki Ishizaki, lead author of the study, explains, “The proposed modular design method provides a new theoretical basis for sequential system upgrades, such that the stability of the current system is surpassed by its future generations. In short, each designer can individually add, remove, and modify their controller without considering the actions of other designers.” His team also demonstrated the practical significance of their method through an illustrative example: generator frequency regulation in an IEEE-standard power system model.

The benefits of modularity-in-design are many, as Ishizaki concludes: “Modular design is a widely accepted strategy that simplifies the design of complex large-scale systems, enables parallel work by multiple independent entities, and enables flexible future modifications of modules.” Future advances in modular design will hopefully make the control of large-scale network systems more easily tractable and make them more easily upgradeable.

Delivering sound to people where they want it for VR, AR