We all know that Android tablets aren’t exactly the industry benchmark, and Google has mostly stopped creating first-party products for this market. But the company still hasn’t given up on tablets. It has just announced an “Entertainment Space” that should make Android tablets vastly better at giving you access to your streaming services, ebooks, and games — right on the leftmost panel of your homescreen.

On the surface, the new launcher addition replacing the Google Discover screen doesn’t look too different from the Chromecast with Google TV interface. It comprises three top tabs that divide the app into sections for video and streaming services, games, and books, with a big banner promoting some content at the top of each. Once you sign in to your favorite streaming platform, the “Watch” tab will be populated with personalized recommendations, including some from YouTube and Google TV. There’s also a “Continue watching” row that aggregates the shows and movies you’ve started watching across your subscriptions.

As the name implies, the game tab comprises a selection of games you’ve got on your tablet in a “continue playing” row, but of course, Google is also trying to get you interested in new titles on you with recommendations. Notably, the company is pushing its Instant Play feature in the hub, which allows you to try select games without even installing them. 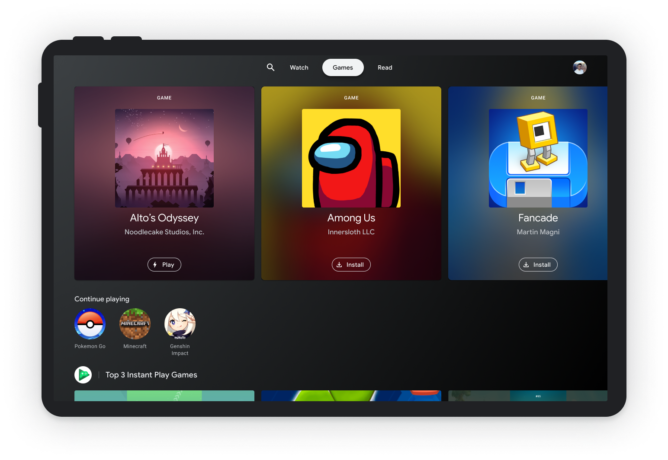 The third tab is basically just another interface for Google Play Books. The section is consists of your library, recommendations, offers, and audiobooks. 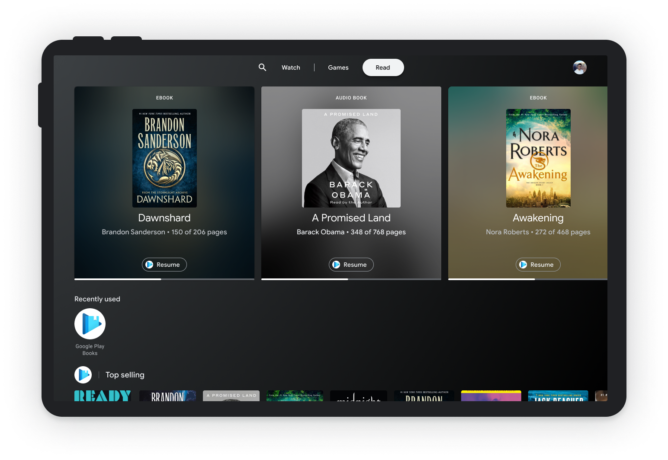 Like the Google TV interface for Android TVs, Entertainment Space won’t be available for everyone right from the get-go. Lacking recent first-party hardware, Google will instead first launch the hub on Walmart Onn tablets, with Google promising that “later this year, Entertainment Space will roll out globally on new and select existing Android tablets from Lenovo, Sharp, and more.”

Following the announcement, we’ve learned that Google will have to do without one of the most relevant streaming services, Netflix. The Verge reports that while Netflix content will appear in the “recently used apps” row, its content won’t be among the recommended films and shows on the screen.

On the technical side, it looks like the Entertainment Space will be a separate launcher APK, as reported by XDA’s Mishaal Rahman, but we’re not sure how exactly the connection between the default launcher and the Space will work.

It’s nice to have an aggregated selection of entertainment services, but ultimately, having yet another interface to access movies, games, and books next to Google TV, Play Games, and Play Books seems rather redundant. The new hub also won’t do much to fix the app optimization problems on tablets, with many applications being nothing but stretched out phone apps with adjustments to the added screen real estate at all — which is arguably a bigger problem than not being able to find good content.

Updated with details on how Entertainment Space will be integrated with the launcher and that Netflix won’t be tightly integrated.