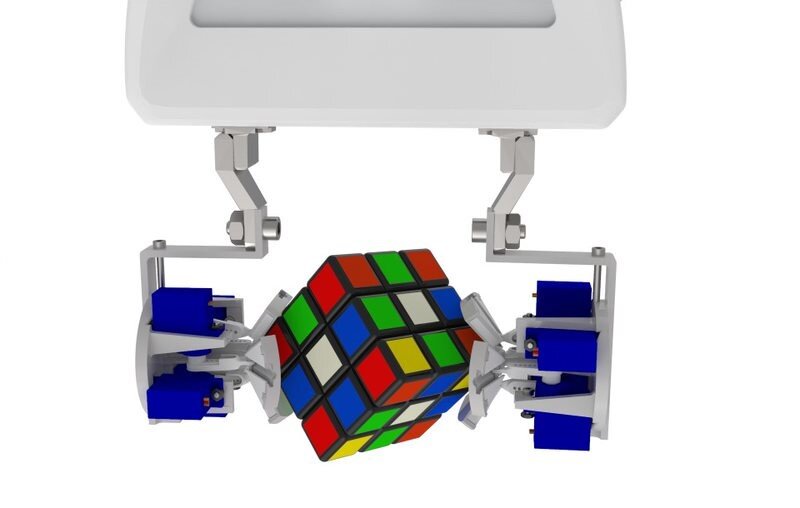 To perform tasks that involve moving or handling objects, robots should swiftly adapt their grasp and manipulation strategies based on the properties of these objects and the environment surrounding them. Most robotic hands developed so far, however, have a fixed and limiting structure; thus, they can perform a limited number of movements and can only grasp specific types of objects.

Researchers at Hong Kong University of Science and Technology have recently developed a robotic fingertip that can change its shape and switch across three different configurations, which could allow it to grasp a broader variety of objects. This fingertip’s unique design, outlined in a paper presented at this year’s IEEE International Conference on Automation Science and Engineering (CASE), is inspired by origami, the renowned Japanese art of paper folding.

“Our study was inspired by two common observations in current research and industrial applications,” Zicheng Kan and Yazhan Zhang, two of the researchers who carried out the study, told TechXplore via email. “The first relates to parallel grippers developed in past research studies, which could help to achieve industrial automation. These grippers require well-selected grasping points, otherwise static equilibrium might not be achieved.”

Researchers have been trying to develop techniques to control the grasping poses of robotic grippers for several decades. However, most existing approaches have significant limitations that prevent them from generalizing well across different objects. The first objective of the study carried out by Kan, Zhang and their colleagues was to develop a fingertip that can be easily controlled and that can perform a variety of poses.

“The other past observation that inspired our study is that for a stable grasp, engineers have to design a specific clamper fixed on parallel gripper for manipulations, e.g. pick and place, etc.,” Kan and Zhang said. “It is tedious when an item on the assembly line is changed with a different shape, which leads to an inefficient manual replacement of the clampers. The morphing fingertip we created could help to mitigate or overcome this issue.”

The robotic fingertip design created by Kan, Zhang and their colleagues is based on other robotic structures presented in their previous studies. In 2019, for instance, the researchers created an origami-inspired monolithic soft gripper with a flat fingertip. While this gripper can also deform and change shape, its performance in terms of payload and dexterity is poor, due to the flatness and softness of the fingertips.

“A Ph.D. student in our group, Mr. Song Haoran, also previously published a paper on contact surface clustering, showing three typical contact primitives for the representations of major local geometries,” Kan and Zhang said. “These fingertips mounted on parallel grippers were tested on different objects, indicating feasibility and stability of the grasps. This paper inspired us to design a morphing fingertip, with its morphology configurations within the three contact primitives.”

The new origami-based shape morphing fingertip developed by Kan, Zhang and their colleagues at Hong Kong University of Science and Technology has two main components: a soft origami skeleton that acts as the fingertip’s morphing surface and motor-driven four-bar linkages that serve as actuation and transmission mechanisms.

The researchers placed a ball joint at the center of the fingertip to enable three-dimensional free rotation and support of the top surface. In addition, they used servo motors (i.e., a class of rotary actuators) to independently control four leaf facets placed on the soft origami skeleton.

“With the combinations of different poses on each leaf facet, many configurations can be achieved for distinct grasping modes, e.g., convex mode, concave mode and tilted planar mode,” Kan and Zhang explained. “These modes can be simulated and predicted by our kinematic model.”

The researchers evaluated the three morphing modes that their fingertip can achieve on movements that are essential for effective robotic grasping. For instance, they tested the effectiveness of the convex mode for what is known as pivoting and pinch grasping, the concave mode for performing a power grasp and the tilted planar mode for in-hand manipulation and reorientation.

Overall, they found that the fingertip they developed has many advantageous characteristics, including the ability to shift quickly between different morphing primitives and grasping modes, as well as between stable and dexterous grasp modes based on the task at hand. The fingertip’s configuration is efficiently simulated and guided by the kinematic model they used.

“We introduced a new solution to the requirement of adaptation and dexterity of robotic grasping that could be applied both in academic and industrial settings, without adding significant extra costs,” Kan and Zhang explained. “Our design can inform future works that try to address these problems using compact, controllable and morphing fingertips.”

In the future, the shape-morphing fingertip designed by Kan, Zhang and their colleagues could be integrated on a number of existing and newly developed humanoid robots. As it is relatively low-cost (i.e., it costs approximately U.S. $5 to make, excluding the control board), it could help to automate assembly line processes, reducing the costs associated with continuously changing the shape of products based on what existing grippers can manipulate.

While the fingertip created by this team of researchers achieved highly promising results, there are still a number of issues to address and tests to run before it can be commercialized. For instance, there is currently a discrepancy between its actual performance and the predictions made by the kinematic model, which Kan, Zhang and his colleagues plan to tackle in their future works by slightly altering its design and fabrication process.

“Another area that we plan to focus on in our future studies is miniaturization, using a smaller motor and more compact structure so that the fingertip can be easily integrated on robot hands,” Kan and Zhang said. “In addition, currently, the structure operates with an open-loop control strategy on morphing. Sensing plays an important role for a robust end-effector in practical applications, so we will also try to add this capability in the future.”

Using deep learning to give robotic fingertips a sense of touch