A Step Forward in the Promise of Ultrafast ‘Hyperloops’ 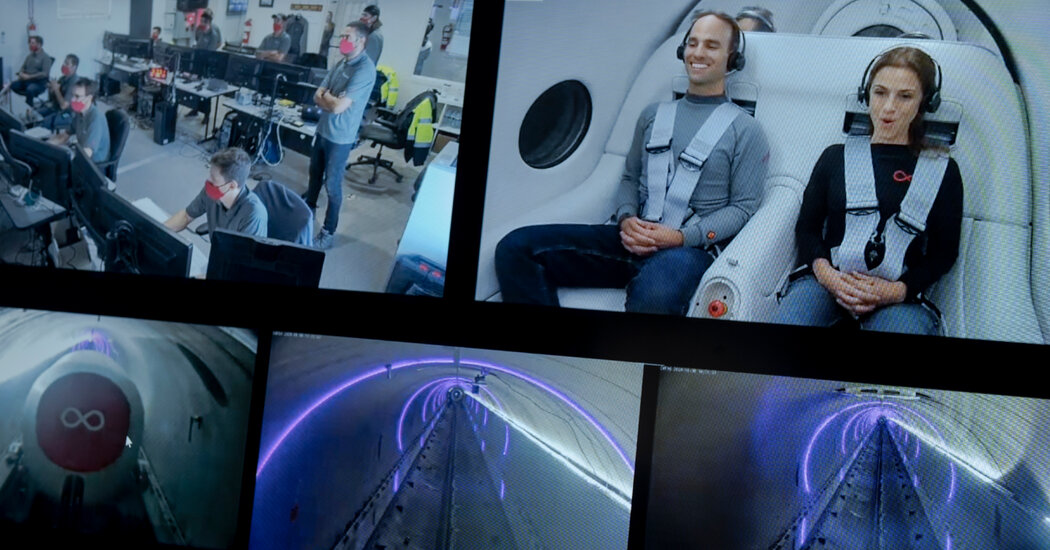 MOAPA, Nev. — Hyperloop technology, which promises to transport people and goods at speeds of up to 600 miles an hour, has long seemed too good to be true. But one company says it has cleared an important step toward commercializing it by moving two of its employees through a test system.

Virgin Hyperloop became the first company to conduct a human test of the technology on Sunday at its 500-meter test track in the desert north of Las Vegas. The two volunteers, wearing casual street clothes, were whisked in a pod that was levitated by magnets inside a vacuum tube to 107 m.p.h. in 6.25 seconds.

While the G-forces on the pod were three times that of an airplane, “it was much smoother than I expected,” said Sara Luchian, 37, one of the test riders and the company’s director of passenger experience. And unlike an airplane, there were no lateral forces that would have caused the pod to sway, she said.

“It felt not that much different than accelerating in a sports car,” said Josh Giegel, 35, the company co-founder and the other volunteer rider.

“This is a step of historical significance,” said Jay Walder, the company’s chief executive, pointing to 20 months of planning. “I don’t think you can overstate it. This is a moonshot moment. I have no doubt this will change the world.”

Whether it becomes a giant leap for mankind is still unclear.

Virgin’s test might be as symbolically important as it is crucial to the technology’s ultimate success. While the pod traveled at a much slower speed than what proponents of hyperloops claim the technology is capable of, company officials described it as a safety milestone.

“The No. 1 question I get from investors is, ‘Is it safe enough to ride?’” said Mr. Giegel. “We’re everyday people, we’re not astronauts. This shows that it’s safe, and observers can take this back to their investors and interested municipalities.”

The test also gives a sense of reality to an otherwise abstract sci-fi-like construct. “You can show the most elegant diagram but at the end of the day what is important is, will people ride it? This is an example of a picture worth a thousand words,” Ms. Luchian said.

The modern hyperloop concept was first described in 2012 by Elon Musk, the top executive of SpaceX and Tesla. He offered up the idea to anybody who wanted to exploit it, and neither he nor his companies are working on hyperloops.

Virgin Hyperloop, which counts Richard Branson’s Virgin Group as a minority investor, is one of several companies looking to commercialize the technology, which they hope will eventually move passengers between cities, and cargo to and from ports.

If it functions as advertised, travel time could be cut significantly — a trip from Los Angeles to San Francisco could, for example, take less than an hour.

Mr. Walder has intimate knowledge of transportation systems, having served as the head of New York’s Metropolitan Transportation Authority and Transport for London. Mr. Walder claimed that hyperloop technology could be the first new mass transit system in a century.

“The U.S. Interstate Highway System, which began in 1956, cannot be the end of our imagination in terms of how we move around,” he said. With hyperloop, “we can have a fundamentally different transportation system.”

Unlike trains, which run on fixed schedules, hyperloop pods would function more like smart elevators. Artificial intelligence would adjust destinations, the number of pods that travel in a convoy and departure times based on demand.

Many experts are skeptical that the technology will live up to its grand promises or be economically viable.

A truck striking the tube could shut the system down, said Carlo Van de Weijer, the general manager of the Netherlands’ Eindhoven AI Systems Institute. As the system aged, it would require expensive maintenance. Hyperloops also might not be able to transport as many people or goods as its proponents claim because individual pods would need to slow down to enter spur tracks.

Like high-speed rail systems, hyperloop companies will have to acquire expensive rights of way, said Juan Matute, deputy director of the Institute of Transportation Studies at the University of California, Los Angeles.

The tubes that carry hyperloop pods will need to be very straight for high-speed travel, and turns will have to be very wide. Once routes are set, acquiring every needed parcel of land could become a nightmare. “If a route has been picked, there are no alternatives,” Mr. Matute said. “Airlines do not have this problem.”

Still, some government officials and hyperloop entrepreneurs are determined to pursue the technology. Virgin Hyperloop, which has doubled its work force to 300 over the last two years and has raised over $400 million, has selected West Virginia as the site for a certification center and a six-mile test track.

It has several projects in planning stages: a route between Pune and Mumbai in India; another between Jeddah and Riyadh in Saudi Arabia; and one connecting Chicago, Columbus, Ohio, and Pittsburgh.

“We’re highly positive and very intrigued with the possibilities for hyperloop,” said Thea Ewing, a director for the Mid-Ohio Regional Planning Commission.

The council estimates that over 30 years, a hyperloop connecting those cities would displace 1.9 billion car and truck trips, reduce carbon emissions by 2.4 million tons and generate $300 billion in economic benefits.

Hyperloop Transportation Technologies, a company based in Los Angeles and Dubai, has built a 320-meter test track in Toulouse, France, and is designing a 1,000-meter test track for Abu Dhabi in the United Arab Emirates. It has also formed a partnership with a container operator at the port of Hamburg to design a system to move cargo.

The ability to move people safely at this stage of the technology’s development is not that important, said the company’s chief executive, Andres de Leon. “We’re testing the program from an engineer’s point of view, not from that of a marketer’s.”

In the Netherlands, Hardt, a 35-employee hyperloop company, has built a 30-meter track that lets the company test its levitation, propulsion and lane-switching technologies. The company has teamed up with Schiphol Airport in Amsterdam to research the feasibility of a hyperloop linking major airports in the Netherlands, France, Germany, Belgium and Britain.

But it’s the movement of cargo that Hardt is developing first. “It’s less risky and it’s easier for stakeholders if we don’t emphasize passengers,” said the company’s chief commercial officer, Mars Geuze. “It’s easier to take the smaller steps.”

Two other companies, TransPod in Toronto and Zeleros in Valencia, Spain, are also working to develop hyperloop systems.

Hyperloop companies have been encouraged by government findings that the technology is feasible. In 2019, the U.S. Department of Transportation put the Federal Railroad Administration in charge of developing standards and regulations for hyperloops.

In Europe, several hyperloop companies have created a technical committee to develop standards, which they hope will be adopted by the European Union.

After Mr. Giegel and Ms. Luchian entered the capsule, it was pushed into a decompression chamber to await the creation of a vacuum. At that point, the gate valve opened and the pod entered the tube, ready for the test.

Virgin’s successful human tests could give true believers in the technology a psychological boost. The company’s executives believe that the system will be commercialized by the end of the decade.

“This technology could be the transition to the future we all want,” Mr. Giegel said. “Today we went from infancy to adolescence.”